First, my apologies for not writing last week! It was a busy one for me, featuring a (successful, as it turns out!) dissertation defense followed almost immediately by my birthday! So I was much busier playing games last week than I was in writing about them. I got to play a medium-difficulty game of Spirit Island, so I was a happy gamer. It’s such a great game that is so complicated, and I love it.

In any event, this week is a new week and I am writing a post today, returning to my series featuring specific book cards for First Edition and the art I’ve chosen for them. Today, I want to focus on Elizabeth Gaskell’s novel Cranford, which was written in 1853. First, a note on Gaskell: while experts in Victorian literature would readily identify her as a major Victorian novelist, she obviously doesn’t enjoy the kind of household name-recognition of Dickens, Charlotte Brontë, or George Eliot. Some of that doubtless has to do with gender: many important novelists who were women were long neglected in critical accounts, an imbalance that still marks the discipline even as extensive efforts are being made to correct it. But it also seems like Gaskell’s novels themselves, which generally work less with gothic or thriller tropes than those of the Brontë sisters and which are more limited in scope than some by George Eliot, have led in part to her being relatively overlooked.

Gaskell’s most famous novel is North and South (1855), which depicts the social upheaval in England that has resulted from the rapid industrialization of the North during the Industrial Revolution. Cranford is also a novel about shifting social conditions and conventions during the nineteenth century, but is set in the fictional small town of Cranford. It is a very episodic novel, almost more of a collection of sketches than a proper novel, all tied together by the place itself.

In looking for a good image for Cranford, I wanted something that focused on the streets of a small town rather than on a group of people. After some searching, I hit upon this image: 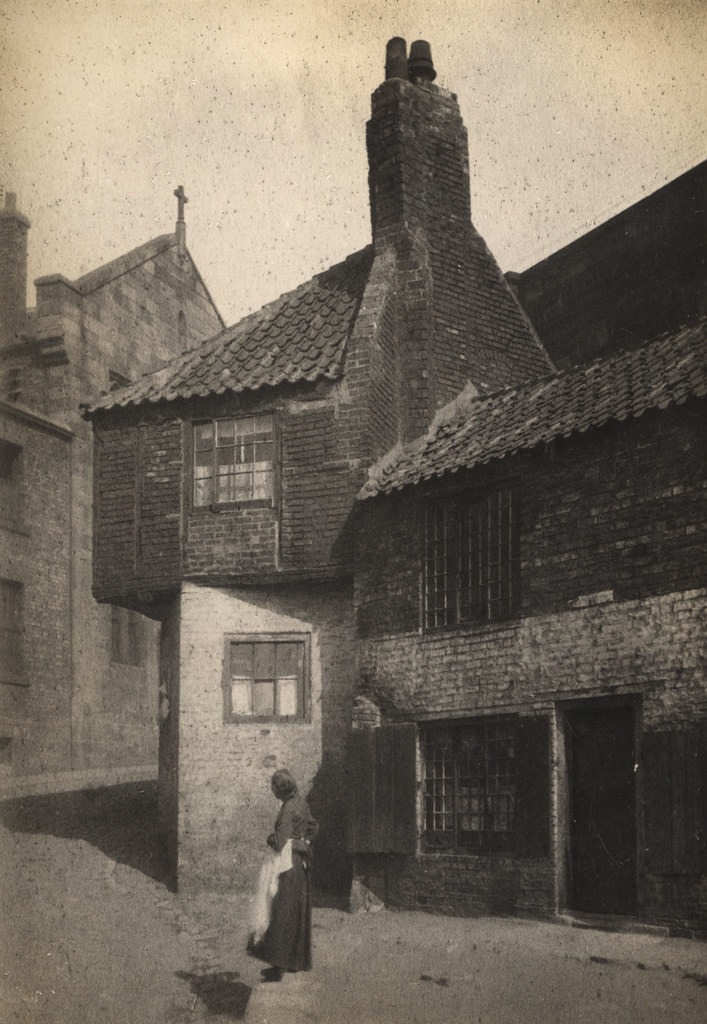 I like this picture for several reasons. First, the main building looks like it’s been patched together over the years out of different materials by different owners. It’s so oddly constructed, with weird boxy angles and different shades of brick or stone. I like its contrast with the church that you can see behind it, too. And then, I really like the figure of the woman in front of the house, looking at the empty street. Since she’s looking away from the camera, her presence emphasizes the buildings over the people who may live in them. Even though the picture is from 1886, about 35 years too late, I think it works for this novel.

Let me know what you think!